Rory McIlroy favored to break American Hold on Golf PGA Championship with third crown in 2020, according to the US sportsbook bet365 NJ predictions. PGA 2020 odds via BetMGM sportsbook. Get free bets bonus offers, use code AMERICANGAMBLER, also in Colorado and Indiana. 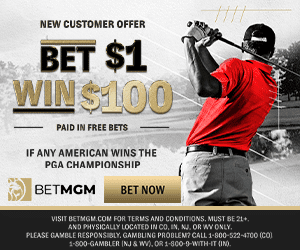 The PGA Championship will be the first men’s golf major held in 2020 following the coronavirus suspension, with TPC Harding Park in San Francisco taking care of hosting duties.

No fans will be permitted to attend the competition on the United States’ west coast, where Rory McIlroy has been priced as early favorite to win his third such title at +700 (8.00) with BetMGM NJ.

It’s been six years since the Northern Irishman won his second PGA Championship—his first coming in 2012—which just so happened to be his most recent Grand Slam to date.

Dustin Johnson finished second at the 2019 PGA Championship and will count his chances as improved after adding the 2020 Travellers Championship to his collection in June:

The perennial contender still has only one major trophy to his name (the 2016 U.S. Open) and is a +1200 (13.00) shot for the PGA Championship, which could be well-served given the form he’s shown of late.

However, the smarter money could be to back defending champion Brooks Koepka, who returns to play hoping to become the first player to win the tournament three years running. The Florida native is among the frontrunners but still offers New Jersey customers value at +1400 (15.00) at BetMGM, especially after a recent absence enforced due to COVID-19 concerns.

Koepka was forced to withdraw from the Travellers Championship after his caddie, Ricky Elliott, returned a positive test for the coronavirus, per Golf Channel. Fans of the four-time major winner will hope he’s been able to prepare for the upcoming Grand Slam return in the interim having finished seventh at the RBC Heritage.

Koepka has played eight rounds on the PGA Tour since golf returned to play and has yet to record a score over 69:

Before play was suspended, @BKoepka was playing par 4s like par 3s.