The popularity of the NFL, it’s been the No. 1 sport watched in the United States for over 30 years, is growing globally. With regular-season games being played annually in England, and now Mexico City, and who knows where to follow, the sport’s popularity knows no bounds.

One of the reasons, and the league can turn its head to this if it chooses, is betting. Even before sports betting became legal in several US states, football betting was everywhere. From small, harmless office pools to multi-million dollar illegal activities, people bet on the NFL. And now a lot of people want to know how to bet on NFL games online legally in the United States.

Now that it is legal to bet on the NFL games (and most other sports) with the click of your computer here is everything you need to know to place a bet on the team of your choice and root them and you on to victory. 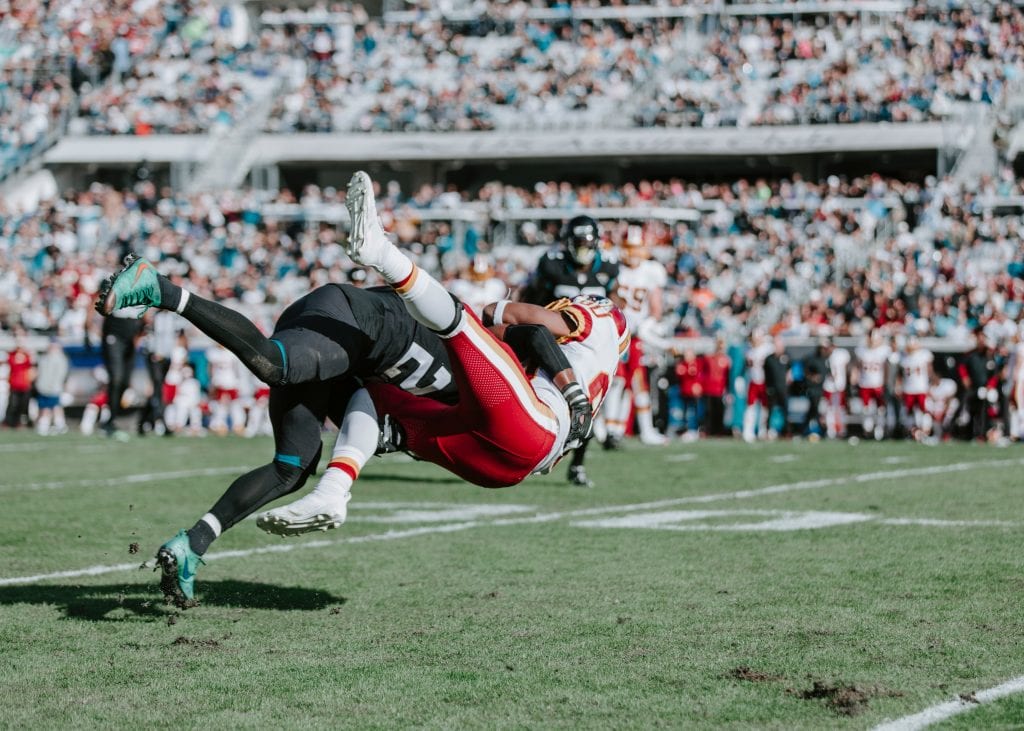 There are different ways to bet on NFL games online. The three most popular ways are the straight-up bet against the spread; the money line; and the over/under point total. Let’s take a look at each of these bets and how they work.

Oddsmakers, who work for the various casinos around the United States (mostly Las Vegas, Nevada – William Hill or NJ – bet365 or SugarHouse) come up with a number —the point spread — for every NFL game every week. That number attempts to equalize the game because obviously some teams are stronger than others. The number will be accompanied by either a + or a – to indicate which team is the favorite and which team is the underdog.

A typical point spread line would look like this:

If a bettor chooses to bet on the New York Giants in this game, his team (the Giants) must either win the game or lose by less than seven points for him, or her, to collect on the bet. A final score of Philadelphia Eagles 28, New York Giants 24, would be a win.

A final score of Philadelphia Eagles 28, New York Giants 21, would result in a “push’’ and all bettors would get their money refunded, or as in commonly called “break even’’.

What is The Money Line Bet?

If a bettor does not want to deal with point spreads there is the money line bet. In this case the team you choose to bet just has to win the game. Using the same two teams as our example a money-line bet would look as follows:

If a bettor chooses the Philadelphia Eagles in this example, if the Eagles win the game, no matter the score, the bettor wins the bet. The caveat is the bettor must wager $400 to win $100 (not great odds), or $200 to win $50.

In this same example if the bettor chooses the New York Giants and they win this game, the bettor would win $250 on a $100 bet (pretty good odds).

Why would a bettor choose this type of bet over the more common point-spread bet? There are two reasons. If the bettor is convinced a team is going to win the game, but isn’t sure the team will win by as many points as the point spread indicates he won’t mind giving up the odds. Or if a bettor thinks an underdog (like the Giants in the above example) is going to win the game straight up, why not bet it and take the good odds.

How to Bet Over/Under in NFL?

This is a very simple bet that has become more and more popular in recent years. It gives fans with no strong opinion on who is going to win the game, another way to bet.

The over/under bettor wages on whether the total points scored in the game will be over, or under, the predetermined number again set by the oddsmakers at the sports book or casino.

Here’s an example using our same two teams from he previous bet.

In this example if a bettor chooses “over’’ the final score (and it doesn’t matter who wins) must total more than 49 points. If the final score is Philadelphia Eagles 28, New York Giants 24, the over bet is a winner.

If the bettor chooses “under’’ the final score must total less than 49 points. If the final score is Philadelphia Eagles 28, New York Giants 17, the under bet is a winner.

If the final score of the game is Philadelphia Eagles 28, New York Giants 21, the game is a “push’’ and all bettors would get their money refunded.

Because of the growing popularity of the sport and the eagerness of the bettors there are other ways to bet on NFL games online as well. Let’s examine a few of those options.

Quarter Lines and Half Lines

The majority of bets on any sport are usually on the final outcome of the particular contest. However, for sports like the NFL, there are 1st quarter and 1st half lines offered as well. The quarter spread is used to determine who will be the winner at the end of the 1st quarter. The same is true for a 1st half line, only the wager ends when the first two quarters are completed. Generally, the 1st half spread will be close to half of the overall spread on the game.

How to bet on NFL parlays?

A parlay bet is a wager placed in combination with the point spread and the moneyline, to increase the payout. A bettor only wins his parlay when all the teams he bets wins.

For example a bettor could place a two-team parlay on the Philadelphia Eagles (-7) vs. the New York Giants; and the Green Bay Packers (-3) vs. the Minnesota Vikings. If the Eagles and Packers both win and cover the point spread the bettor would receive 2.6 times his bet. So a wager of $100 on those two teams would result in a win of $260. But remember both teams must win. If either the Eagles or the Packers lose, the bettor loses his original $100 bet. If one team wins and the other team pushes, it is turned into a single bet and the bettor would win $100.

Bettors can increase the amount of teams bet and therefore increase the odds. Most sports books pay off as follows:

Some casinos will allow bettors to bet as many as 15 games in a parlay, but think about that. It’s difficult enough to pick one winner, let alone 15.

So in the above example you can either make it Philadelphia Eagles (-1), or New York Giants (+13) and either Green Bay Packers (+3) or Minnesota Vikings (+9). The payout on a two-team, 6-point teaser is usually even money.

If this looks too easy and too good to be true. Well, there is a reason they are called “teasers’’.

Many casinos and sportsbooks offer what are known as future bets. They are what they say, a bet into the future.

The most popular NFL future bet is who will win the Super Bowl. You can wager on whichever team you like, usually at very good odds, and if you are fortunate enough to pick that winner, you will be rewarded handsomely.

Now that you know all the bets you can make. Here are two other factors you need to know before you make your wager on NFL games online.

The point spread, or odds, you see early in the week isn't always the same on you will see at game time. Lines change for various reasons. If one side is getting most of the money the oddsmaker will adjust the line to try and even it out. Using our earlier example of Philadelphia Eagles (-7) vs. New York Giants (+7), if all the early money goes to the Giants, the line would adjust and could be Philadelphia Eagles (-6) vs. New York Giants (+6).

Injuries could also move the line. If it becomes known a key player, especially a quarterback, is injured the line will compensate for that.

Unlike horse racing, however, the number you have when you made the bet is your number no matter what the line is when the game begins.

Also known as “the juice’’ the house’s advantage. When a bettor bets on a NFL game he is usually risking $110 to win $100 on a straight bet. That “vig’’ is what keeps the casinos and sportsbooks in business.

Now when you understand basics in NFL betting you can enjoy the game lagelly at, for example, BetAmerica sportsbook.

Photo by HENCE THE BOOM and Wade Austin Ellis

NFL: Why betting on the underdog in the Super Bowl is such a good play