Getting close to the best NFL players in the world has always been difficult, even more so now with reduced crowds and games being played behind closed doors.

However, purchasing autographs and signed memorabilia have always been an easy way to get close and following the results of the NFL Super Bowl LV, the team at American Gambler analysed a variety of US sports retailers and online auction sites to find out which footballers have the most valuable signature in the world.

Who’s Worth More Than Tom Brady?

He may well have just won his 7th Super Bowl title, but Tom Brady does not have the ‘Most Valuable Signature’ in NFL. That honor goes to Joe Namath ‘Broadway Joe’.

The average cost of acquiring signed merchandise and/or memorabilia from ‘Broadway Joe’ is a staggering $21,062. That’s almost double the cost of second placed Tom Brady, whose signature fetches an average price tag of $11,007.

To view the top 20 most valuable signatures in NFL, please look at the graphic below. 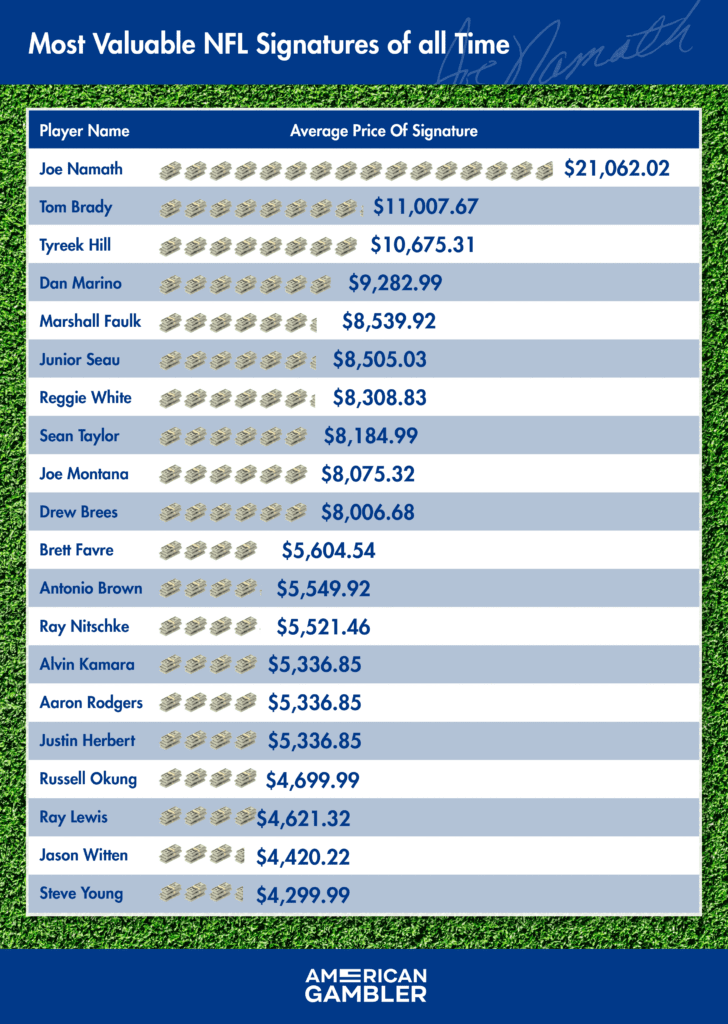 All data accurate as of February 2021.

For this study, we selected the top 100 rated NFL players of all time from searched online retailers and auction sites for their first and last name, followed by the words ‘signed’ and/or ‘signature’.

From there, we recorded every signed item we could find and divided the total cost by the number of items to get an average.

For consistency, we made sure we were comparing similar signed items (for example, caps, jerseys, footballs) so as to not skew the results in anyway.

You can bet on NFL games online in 10+ states in the USA via mobile sportsbooks. Read about BetMGM bonus, William Hill free bets and Pointsbet promotions.