Pointsbet is not available yet in Ohio. The sportsbook may launch their mobile app in 2021, bonuses to be expected.

Watching the sports betting hopes of Ohioans is akin to following a bouncing ball. One day, hopes are way up. The next day, they are dashed.

On the one hand, both Unibet and theScore Bet have unveiled plans to eventually open sportsbooks within the state once legalized sports betting is given the go ahead through an agreement with Penn National, which owns casinos in Dayton and Toledo.

When that day will come, however, still seems months away. Indications are that Ohio’s State Legislature won’t even resume consideration of the sports betting bill until after the Nov. 3 U.S. elections. The legislature is scheduled to begin its first post-election session on Nov. 10.

One stumbling block is over regulatory control. The bill passed by the Ohio House lists the Ohio Lottery Commission are regulators of the sports betting industry. Ohio’s Senate is of the opinion that the Casino Commission should be in charge.

Insiders anticipate that this and other discussions will be completed in time to officially legalize sports betting prior to the end of 2020. And that’s when the online sportsbooks will begin lining up to get in the door.

Pointsbet will be in that queue. The Australian company has aggressively moved into the USA market, and already has a sportsbook partnership established within Michigan, Ohio’s neighboring state.

In return, the Hollywood Casino gave Pointsbet the rights to run sports betting apps in partnership with the company’s casinos in Indiana, Louisiana, Missouri, Ohio, and West Virginia.

Known for their unique style of wagering called pointsbetting, which enables bettors to win more money based on the margin in the outcome of their winning wager, Pointsbet is an official betting partner of Major League Baseball and of NBC Sports.

Ohio’s big-league sports teams include the MLB’s Cleveland Indians, as well as the Cleveland Browns (NFL) and Cleveland Cavaliers (NBA).

What to expect from Pointsbet Ohio?

Pointsbet sportsbook app offers wagering on all of these sports, as well as many more. Get ready, Ohio. This betting site is known for their deep betting lines, including a vast array of in-play wagers. The menu of promotional offers at Pointsbet is also among the most unique in the industry.

For example, the Karma Kommittee at Pointsbet examines bad beats to determine whether bettors deserve a refund for the heartbreak they suffered.

Pointsbet OH Free Bet Promo is not avilable yet. Code to be announced. 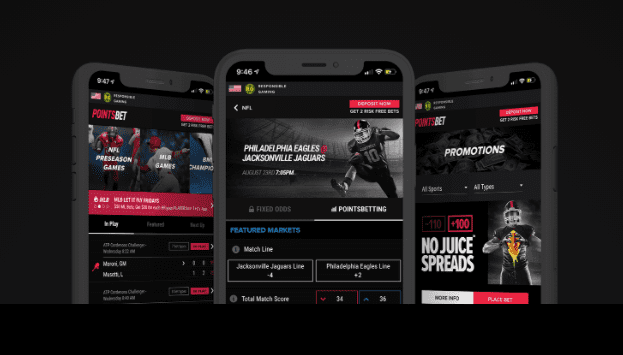 PointsBet’s mobile app is available for both Android and iOS users.

All betting apps in Ohio.