Marbula E racing series or the “pinball of motorsport” is a new, popular e-game that’s fun to watch, participate in and soon, bet on. Marble Racing betting odds are not available with bookmakers in the United Kingdom (maybe, try Pinnacle or check later on bet365 esports section) or United States, and most betting sites/apps are not offering markets on marble racing.

Mercedes recently threw their support behind the new innovation and provided a glimpse at the kind of action fans can expect from the sport:

In partnership with Jelle’s Marble Runs and ABB FIA Formula E, ‘zero emission’ marble racing wants to replicate the all-electric Formula E series while the season is suspended due to the COVID-19 pandemic.

Dubbed the ‘pinball of motorsport’, the inaugural event took place on April 18, 2020 at 11:00 (BST), the original date set for the Formula E Paris E-Prix.

The first Qualifiers of the brand new Marbula One! (Marble Race, F1 for marbles) YouTube channel. Watch live and online. Participants will have to master the course of the Savage Speedway!

Are marble-racing wagers offered by sportsbook apps in the U.S. or UK?

Not yet, but we expect it will happen in the near future. Marbula One racing betting odds (and bonus offers) will be offered alongside other virtual or esports lines by a host of legal betting sites.

The interest in Marbula One and marble racing is growing at a fast rate, according to Google Trends. Bookies and gamblers should be ready.

Do you think we will be able to make betting predictions on marbles races, or will it be impossible to pick the winning ball due to the random nature of the sport, like in casino slots?

SBO.net provides links to the few sportsbooks which will be open to setting betting odds accepting bets on the sport of marble racing. 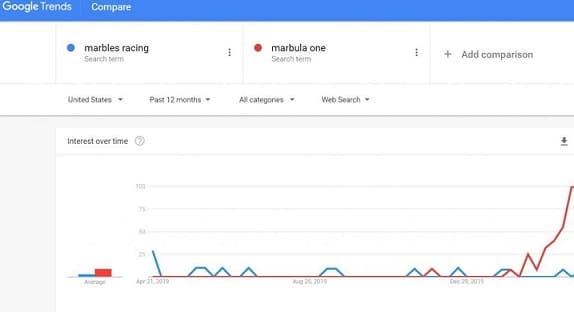 What is Marbula E Racing Series?

Amidst this COVID-19 quarantine, desperate sports fans may be about to lose their marbles. Thankfully, due to the Marbula E Racing Series, those sports-starved spectators can get lost in marble racing.

A partnership between Envision Virgin Racing and the Netherlands-based Jelle’s Marble Runs is creating the Marbula E Racing Series.

On March 13, the Formula E Series – a worldwide circuit featuring electric-powered race cars – was suspended due to the coronavirus outbreak. Searching for a way to keep some form of racing in the forefront of people’s minds, the Marbula E Racing Series was born.

It launched April 18 to coincide with the slated event that was to be held in Paris. Instead of electric-powered cars, gravity-powered marbles toured a uniquely-designed layout during the race. The series will follow the same schedule as Formula E, at least until the actual racing is cleared to resume.

As would occur with the regular series, qualifying was held among the marbles to determine pole position and the starting grid for the race.

Mercedes opened the series with a victory, followed across the finish line by Venturi and BMW.

Further races would be contested on May 3, June 6 and June 21, all events that were postponed due to COVID-19. Formula E races still up in the air include July 11 in the USA and a July 25-26 doubleheader in London.

Will those be contested by electric cars, or marbles? Time, and the flattening of the virus curve, will determine that fate.

Jelle’s Marble Runs (JMR) have been designing courses and began contesting a Formula One-style series, the Marbula One, earlier this year.

Previously they’d held Marble Rally outdoor races and the Marble League, a competition that puts marbles against each other in Olympic-style events.

It’s become a sport with more than a cult following. All events are broadcast on the JMR YouTube channel. There are over 720,000 subscribers to the channel and each race gets views that number into the millions.

The first race of the Marbula One season has been viewed over 1.4 million times.

JMR operates a Patreon site where $1, $5 and $10 monthly memberships provide in-depth access to all that goes into creating the world of marble racing.

Online sportsbooks established betting lines on the Marbula One series, so it only seems logical that a top European-based sportsbook like Pinnacle or Bet365 will be quick to offer odds on the Marbula E Racing Series.

Pinnacle already offers odds on over 20 virtual sports, including stock car and speedway racing. At Bet365, they are carrying betting lines on the virtual NASCAR and SuperCars eRacing series being contested by actual series drivers racing their virtual selves.

Bet365 is providing both outrights and head-to-head matchup wagers on Sunday’s race at Richmond in the eNASCAR Pro Invitational Series. The sportsbook is also carrying outright odds for Wednesday’s eSuperCars Mount Panorama race.

It shouldn’t be long until we see similar betting markets created for events on the Marbula E Racing Series.