With the vast majority of elite sport now being played behind closed doors, football fan TV channels are exploding in popularity.

From Arsenal Fan TV to The United Stand, the team at American Gambler have crunched the numbers regarding subscribers, viewing figures and most importantly, ad revenue, over the past 12 months, to reveal who’s top of the fan TV charts.

Across the top 20 most subscribed football fan TV channels on YouTube (minimum subscriber base of 10,000), the combined number of views as of January 2021 stood at an enormous 668 million.

With Nielsen research estimating the total global audience for the entirety of the Premier League to be 3.2 billion views, that means roughly 1 in every 5 Premier league fans consume unofficial fan TV content. Impressive reach.

While firmly at the top, there are other channels hot on their heels. Year on Year (YoY) viewership comparisons reveal a massive 86% increase in views for the Manchester United supporting, ‘The United Stand’; whereas during the same time frame, AFTV only increased their viewing figures by 26%. 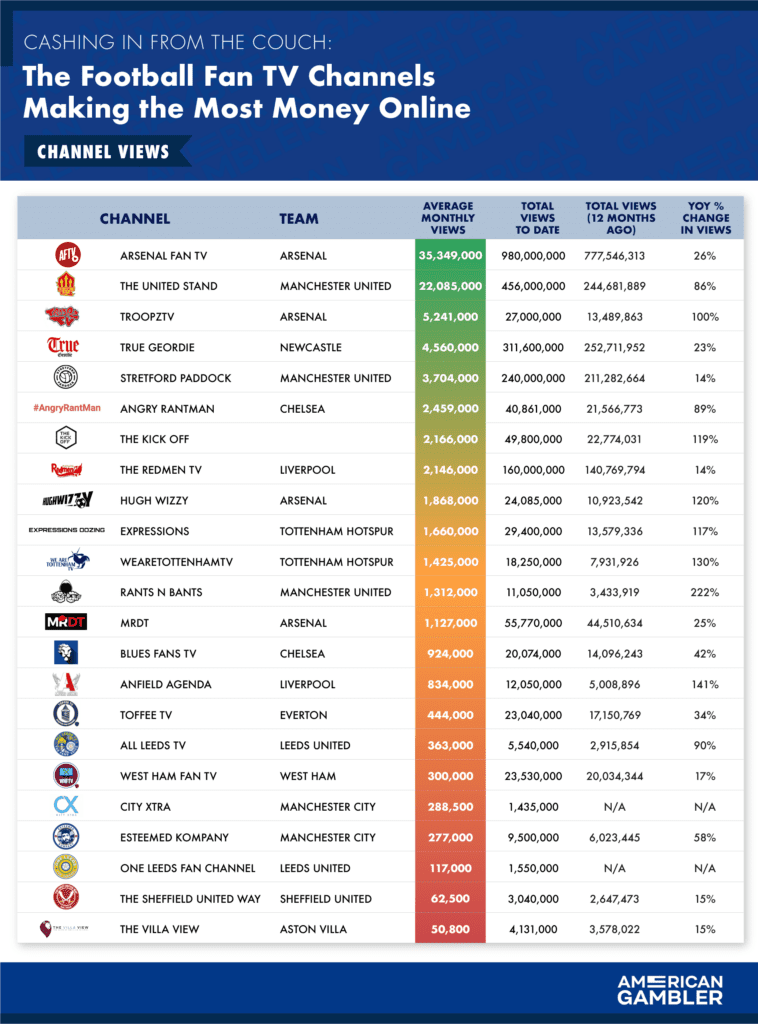 Ad Revenue: Who’s making the most?

The restrictions on matchday fan attendance at stadiums has ultimately provided a boon for football fan TV channels, with matchday entertainment now no longer restricted to pre- and post-match interviews.

The new ‘Watch Along’ format of streaming live matches with fan reactions has proved hugely popular and this is reflected by the very healthy advertising revenue figures.

The winners in this category once again are AFTV, pulling in an estimated £1.2m/ $1.7m per year from YouTube adverts alone.

Broken down per match, for every Premier League game Arsenal play, AFTV stand to earn approximately £32,504/ $44,526. This is before earnings from brand partnerships, sponsorships and other income streams are accounted for.

Taking out second placed, The United Stand (£0.8m /$1.9m), AFTV are so popular they earn more advertising revenue than every other football fan TV channel combined.

You can view the entire list of earnings below. 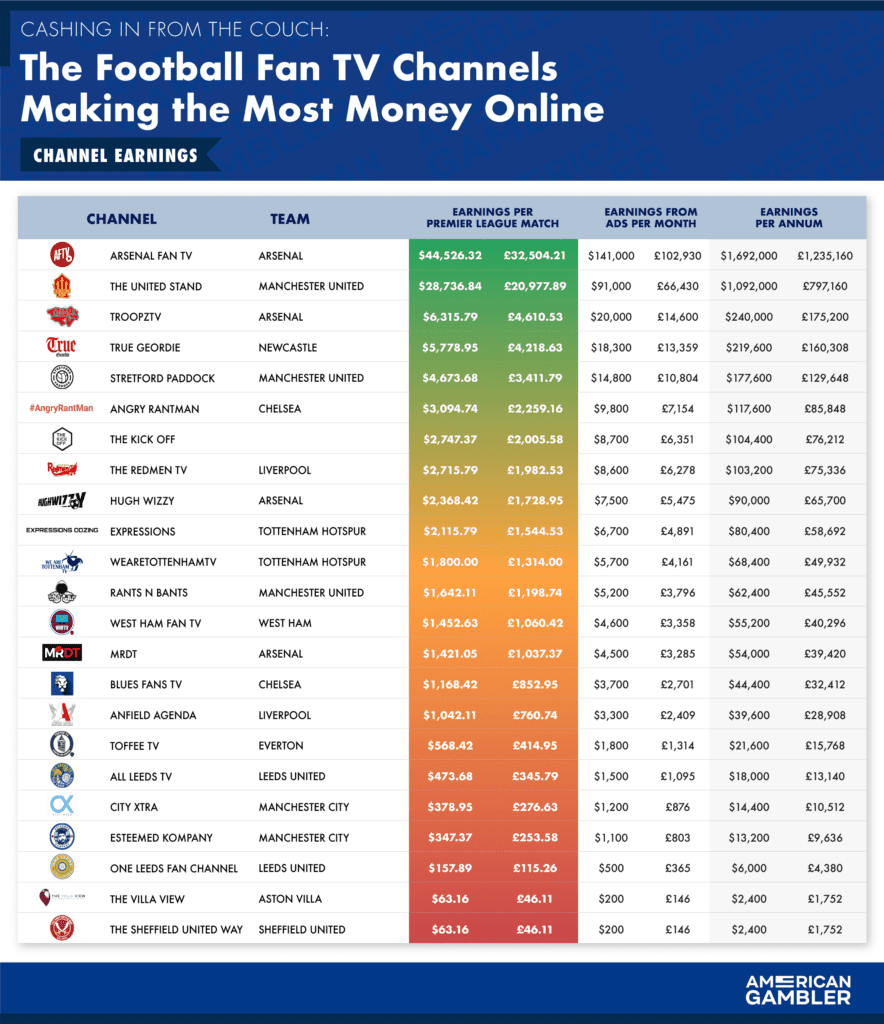 Subscriber growth across the board

Despite criticism from the press, media pundits and certain players, there is a clear appetite for unofficial football fan TV content.

Every single channel analysed was grew their subscriber based by a minimum of 6% YoY, with the average increase in subscribers across all channels being 40% YoY.

The fastest growing channels were Anfield Agenda (103% increase in subscriber numbers YoY), We Are Tottenham TV (92% increase YoY) and All Leeds TV (81% YoY).

As of January 2021, the total number of subscribers for the top 20 football fan TV channels stood at 7.1m. 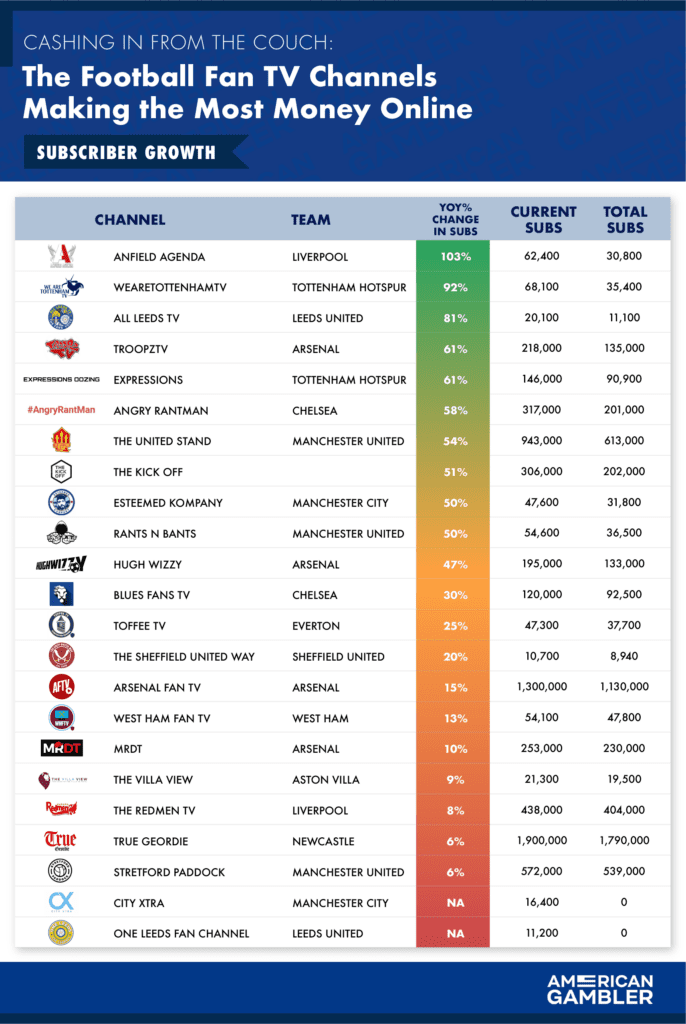 Learn how to bet on soccer with free bets. Try William Hill's bonus for 2021 and live TV streaming service in NJ, CO, IN, IL, WV.